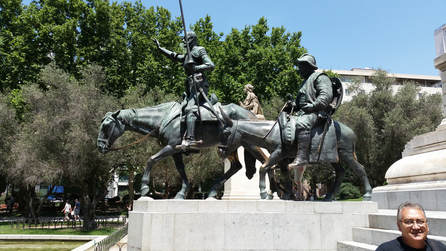 Lessons we can learn from an old tale, Don Quixote, and a 21st century update!

Don Quixote follows his dreams even when it is not popular.   He is ridiculed and laughed at, but he is undeterred.   He never forgets what is most important.   His friends and family  try to stop his adventures.   They even burn his books and hide his library.   But he still remains resolute.  He will follow his heart's desire to be a knight errant, and  never forgot his true love, Dulcinea del Toboso.

If someone had written this story today, it would be about someone who has gone to too many Star Wars & Star Trek Conventions.   One  day the allure of traveling in outer space overwhelms them, and they decide to become a Jedi Knight.  At night they dress up in a robe like a Jedi , and they to fight crime here on planet earth.  They may even know how to speak Vulcan or another language from another galaxy.   Their own desire pushes them to the edge of reason and over.    This story could be written about someone who has dementia, and this is the way it is manifesting itself.  So everyone just looks the other way when they see that "old guy acting crazy again!"

When my father had dementia, he thought he was an CIA agent.  So maybe I see my dad in this story of one last chance for creating your own legend.   And don't forget Spock's farewell,   "Live Long and Prosper."
at September 28, 2018